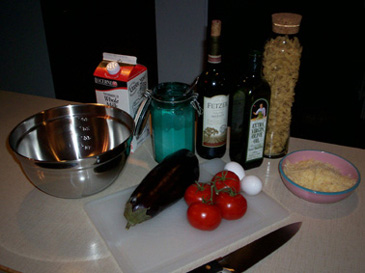 First, slice the ends off of the eggplant, and then cut it into nice thick slices. (About 1/2 inch thick) 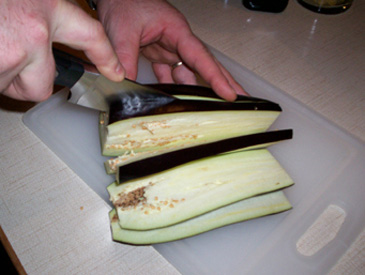 Here you can see that I’m removing the large portion of skin from the side of the eggplant…not really necessary, but some of us like less skin. Place the sliced eggplant into a colander, rinse it, and let it sit while you move on to the next steps.

While the eggplant is sweating in the sink, get a frying pan and start heating your olive oil… you don’t really need much. Just enough to cover the bottom of the pan. You want the oil to be plenty hot when you put the eggplant in, because if the oil isn’t hot enough the eggplant will soak up the oil and won’t brown  quickly.

Mix two or three eggs in a bowl or deep platter. Add some milk to help get it nice and creamy. Put a fair amount of flour on a separate plate or cookie sheet and add some seasonings… I use some black pepper and fresh minced garlic (in a pinch, garlic powder will do). 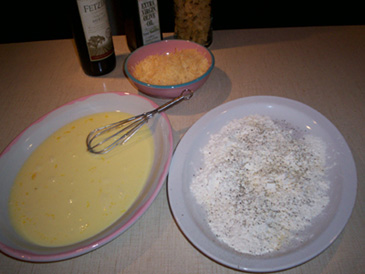 Take the sliced eggplant and place it into the egg batter… coat each piece well, and allow them to soak while you’re letting your pan of oil get hot. 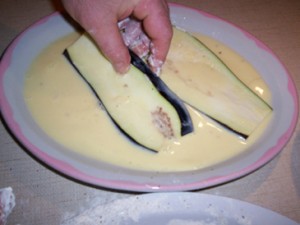 Try not to allow too much of the egg batter to drip off as you are placing it into the flour…it helps to create a nice crust when you brown the eggplant in the pan. 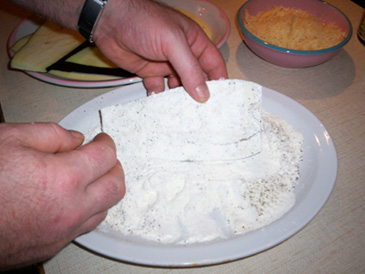 While the pan is getting hot on the stove, take each piece of egg battered eggplant, and coat them generously with your flour mixture.

You’ll need to press down on each piece of eggplant, and make sure that they have a nice coat of flour. 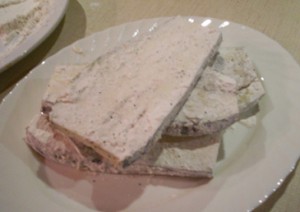 Here is our beautifully coated eggplant, ready for the frying pan.

Just make sure your oil is hot… I can’t stress enough how important this is if you want your eggplant to keep some of its texture. When the oil is good and hot, the egg batter sears on the outside of the eggplant.

Eggplant only needs a few minutes to cook and it will look like this: 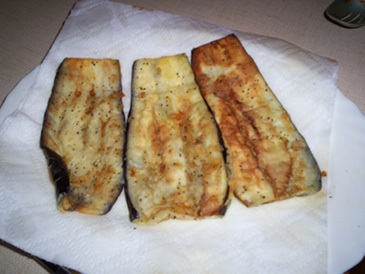 We are using wide egg noodles today, but you can use whatever kind of pasta you like… Place the pasta in a baking dish… it doesn’t matter if you use a pie dish (like we have here), or a cake pan… whatever you have available will work.

Step Two for the Eggplant Parmesan Recipe – The Pasta

Sprinkle the pasta with your cheese. I like to use a little mozzarella in the noodles, because it ends up with a nice texture, but using just grated parmesan all by itself, it great too.

Now, spoon in some of your pasta sauce on top of the pasta and cheese.

Place your slices of eggplant on top of that. 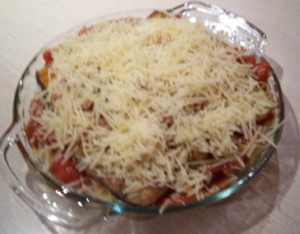 Put some more tomato sauce on top of the eggplant, and then add some more parmesan.

Put the dish in the oven on 350 degrees for about 20 minutes… If you want to brown the top a little bit, like I’ve done, just turn on the broiler for a few minutes at the end…be sure to watch it though, because its already plenty hot, and it will only take about a minute.

Well there it is – Eggplant Parmesan Recipe completed! Looks delicious, doesn’t it! Since we made this last night and had it for dinner, I can also tell you that it tasted incredibly good, too. 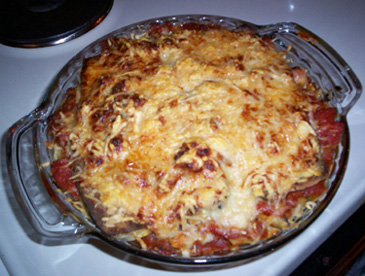 I hope you enjoy this Eggplant Parmesan Recipe!
Let us know how it turns out for you.