May I suggest, this refreshing Non-alcoholic Lemonade Spritzer?

When it comes to a cool summer beverage, the competition between lemonade and iced tea is fierce. For years, these thirst-quenching beverages have been filling summer coolers. 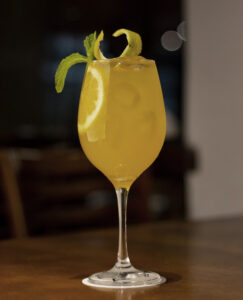 However, the issue remains: Will the overall winner this year be lemonade or iced tea?

Both beverages have a long history, with lemonade dating back to ancient Egypt and tea making its way across the globe from China to Europe and the southern United States, where sweetened variants have been consumed for decades.

If you can’t decide between the two, you might mix half lemonade and half iced tea to have both in one! Great idea. How about giving this Non-alcoholic Lemonade Spritzer a try?

Fill glasses half-way with the mixture and top it off with sparkling water. Add ice, a lemon or lime wedge, and maybe even some fresh mint leaves for garnish.

Green tea is most known for its ability to help your body stay strong and fight off disease – scientists have studied green tea and reported a possible linkage with the reduction of chances for people to contract some types of cancers, along with positive effects on our bodies like increasing our energy levels. It has been linked to helping eliminate our chances of contracting other diseases as well, such as cardiovascular disease and arthritis – and it can even help lower our cholesterol levels. [Learn more]

What about black tea? Compounds in green and black teas both have a healthful impact on several markers of heart disease risk, but debate continues as to which kind of tea is healthiest. Recent research suggests it may be a dead heat. In a study, green and black tea appeared equally protective against fatty arterial plaque buildup. [Read more]