Twice baked potatoes are an easy side dish that you can make ahead of time.

The first thing to do before making your twice baked potatoes is to bake them. First, scrub your spuds, wrap them in foil, and then put them in the over to bake at 350 for about an hour. If your potatoes are large, cook them 15 minutes longer and check again. The potatoes should slightly “squish” when pinched with a hot pad. Don’t burn your fingers! 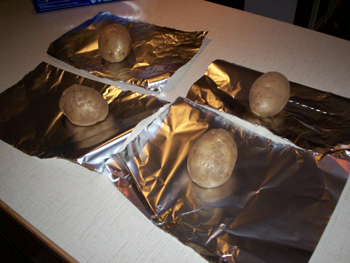 You can also use leftover baked potatoes, which makes twice baked potatoes quicker and easier. Often times I will bake twice the amount I need when we’re having regular baked potatoes. Store the leftovers wrapped in the foil, in the fridge until you’re ready to make this recipe.

After cooked, remove them from the oven, let them cool, take off the foil, and cut them in half lengthwise.

Next, take a spoon and scoop out the majority of the potato inside. Put all of the potato scoops into a medium sized mixing bowl. You will end up with these potato skins (below). Set them off to the side for now. TIP: Another option is to season the inside with sea salt and pepper and broil until slightly browned before filling. This works especially well if you like crispier skins on your twice baked potatoes. 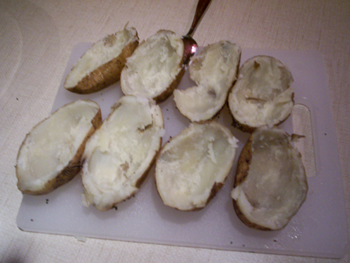 In your mixing bowl of potato filling, add about 4 tablespoons of sour cream, two tablespoons of butter, and a cup of freshly grated cheddar cheese. Then mix it well. 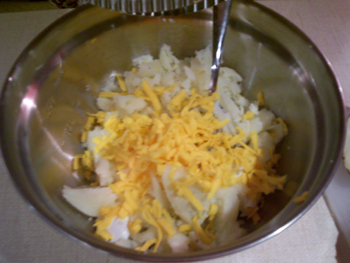 We use a hand potato masher rather than a mixer because we like the little potato lumps that are left in the mix for some added texture. And why have more to clean up?

After mixed well, scoop it back into the potato skins and add some of the cheese on top. Broil until the cheese is nice and bubbly and slightly brown. 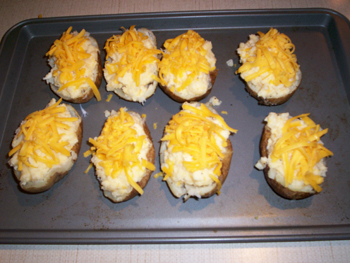 To warm twice baked potatoes if prepared ahead of time or until the main dish is ready, put them in the oven  at 300 degrees or under a low temperature broil. Keep an eye on them so they don’t over cook.

Twice baked potatoes can go with a lot of different meats, for instance, we usually have them with our broiled wild salmon dinner. They are also great with pork chops, baked chicken, or even by themselves with bacon on top! 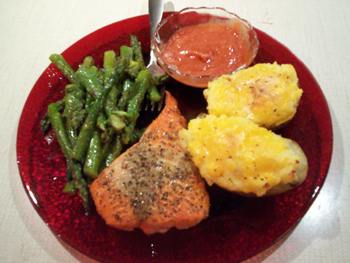 The nutrient content of potatoes can be found here >>